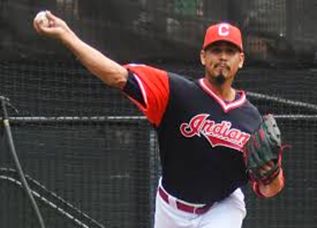 On September 1st, 2019, Indians Pitcher Carlos Carrasco returned to the mound after being diagnosed with chronic myeloid leukemia in June of that same year. The Indians were in Tampa that night to face off against the Rays. Although they would eventually lose the game by a final score of 8-2, they certainly had won back a longtime fan favorite in the city of Cleveland. Not only was he a fan favorite, but he was also someone who fans could now look to as an inspiration, showing that any obstacle can be overcome, even in the face of great adversity.

Carlos Carrasco was born on March 21st, 1987 in Barquisimeto, Venezuela. He attended the Liceo Federico Carmona High School, and was signed as an unrestricted free agent by the Philadelphia Phillies on November 25th, 2003. Carrasco spent his entire 2006 season with the Lakewood BlueClaws, the minor league affiliate of the Phillies. Upon entering the 2007 season, Carrasco was ranked as the top prospect of the Phillies organization, as well as the 41st overall prospect in the MLB. He would participate on the World roster in the 2006, 2007, and 2008 MLB All-Star Future Games. Although he was recognized as a highly regarded player in his youth, Carrasco never had the chance to demonstrate his skills in Philadelphia. However, at the age of 22, his opportunity would finally come.

On July 29th, 2009, the Phillies traded Carrasco to the Cleveland Indians. After only playing a total of 12 games in his first two seasons, he would blossom as a regular starter for the team, participating in 21 matches in 2011. Although Tommy John Surgery would sideline Carrasco for the totality of the 2012 season, he would pick up right from where he left off in 2011. In the next three seasons, Carrasco would play in 85 games (and start in 51 of those 85 matches). Sadly, when the 2016 World Series came the Indians’ way, Carrasco would again be denied the opportunity to participate, this time due to a hand injury. In that 2016 season, he would play / start in 25 games and maintain an ERA (Earned Run Average) of 3.32. With only two playoff games under his belt, many are hoping for Carrasco to finally break the barrier, and become a true contributor for the Indians in postseason play.

With his time off the field, Carrasco was able to become a U.S. Citizen (in August, 2016). In 2019, he was awarded both the Roberto Clemente Award (given to a player who “best exemplifies the game of baseball, sportsmanship, community involvement and the individual’s contribution to his team”) as well as the American League Comeback Player of the Year. He has donated hundreds of thousands of dollars, time, and supplies to organizations in countries including Venezuela – his home country – as well as Colombia and the United States.