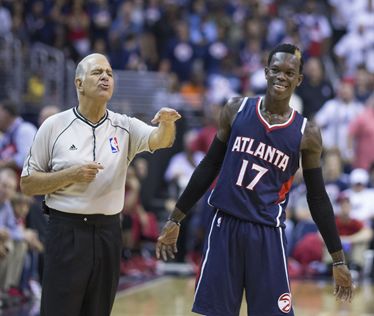 Oklahoma City: home of the Western Cowboy and Heritage Museum. When it comes to the wild west, it doesn’t get any more authentic than here. But there is a little more than meets the eye with this unique town. The city’s only professional sports team, the Oklahoma City Thunder, is one of the most enjoyable squads to watch in the NBA right now. With their new leader in Chris Paul to compliment the young, promising talents of Shai Gilgeous-Alexander, Hamidou Diallo, and Terrance Ferguson, there is great anticipation for the Thunder to pull off an upset when the playoffs roll around. There is one player however, whose skill set and demeanor is easy to overlook, yet critical for the recent success in Bricktown: Dennis Schröder.

Dennis Schröder was born on September 15th, 1993 in Braunschweig, Germany. He began his professional basketball journey in 2010, participating as a member of SG Braunschweig (the minor league affiliate of the Phantoms Braunschweig team of the German Basketball Bundesliga). Even at a young age, Schröder’s talents on the court were distinct. In his first year with SG Braunschweig, he averaged about 8 points and 2 assists per game. His second year saw dramatic improvements across the board. Averaging 18 points and 7 assists per game, Schröder was transforming into the quintessential point guard any NBA front office would love to acquire. In 2012, he was promoted to Phantoms Braunshweig, and for good reason. After another strong season, Schröder was awarded both the German Basketball Bundesliga’s Most Improved Player as well as the Best Young German Player of that season.

With all of his success in Germany, it was an understatement to say that Dennis Schröder was bound for the NBA. In 2013, he declared for the NBA Draft; and that year, was selected with the 17th pick in the first round by the Atlanta Hawks. Although his first year with Atlanta was a struggle, this did not impede the success that was to come for him and his new club. In the 2014-15 season, Schröder would average 10 points and 4 assists in 20 minutes per game. His contributions factored into the Atlanta Hawks getting the number one seed in the NBA’s Eastern Conference, and setting them up with a duel against LeBron James and the Cleveland Cavaliers in the 2015 Eastern Conference Finals.

Although Atlanta would be swept in that series by the Cavs, Schröder’s potential was still at its peak. In July of 2018, he was traded to the Oklahoma City Thunder. In his first season out west, alongside All-Star point guard Russell Westbrook, he would average 16 points and 4 assists. The Thunder would fall to Damian Lillard and the Portland Trail Blazers that season, yet there was still promise for Oklahoma City when they traded Westbrook to Houston for the effervescent, savvy veteran Chris Paul. Now in his second season with the Thunder, Schröder is having one of the best years in the NBA. He has accomplished the second highest scoring average of his career, and is a very reliable second fiddle to Paul.

As of August, 2020, the Oklahoma City Thunder are the fifth seed in the NBA’s Western Conference, and keep surprising their doubters as they continue to win games. Watch out wild, wild Western Conference! There are some new sheriffs in town!