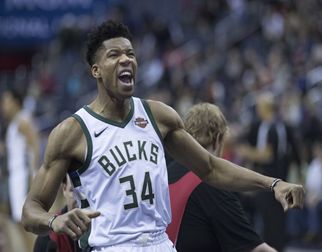 On May 25th, 2019, the Milwaukee Bucks were in Toronto to take on the Raptors in Game 6 of the NBA Eastern Conference Finals. Down 3 games to 2 in the best of seven series, Milwaukee was looking to extend their season, and not let it dissipate north of the border. The Bucks were in control for most of the game, but Raptors superstar Kawhi Leonard took over in the fourth quarter, and Milwaukee’s season ended that night. But there was still so much to look forward to as a bright future for the Bucks seemed inevitable. Quality players, a strong coaching staff, and most notably, the “Greek Freak” himself: Giannis Antetokounmpo.

Antetokounmpo was born on December 6th, 1994 in Athens, Greece. His parents, Charles and Veronica, immigrated to the country from Lagos, Nigeria in 1991. Giannis was the second of four sons in the family. Although Antetokounpo’s parents went to Greece in search of improved opportunities, they and their children were still faced with unprecedented challenges.  Even with the fact that they were born in Greece, Antetokounmpo and his siblings were not granted Greek citizenship, due to the immigration laws enforced in the country at the time. With his parents unemployed, Antetokounmpo and his siblings were required to sell minor trinkets, such as watches and sunglasses, in the streets of Athens in order to support the family.

Antetokounmpo’s basketball journey began in 2009, when he was involved with the youth team of a Greek basketball organization known as Filathlitikos. Due to his unparalleled skill and athleticism, he would play for the club’s senior team in 2011. Antetokounmpo would then go on to play in Greece’s semi-pro league as well as the Greek 3rd Division. At the age of 18, Antetokounmpo signed a four-year contract with a Spanish based team known as CAI Zaragoza in 2012. However, those four years would not all be played out.

At that same age, Antetokounmpo declared for the NBA Draft in April of 2013. With the fifteenth pick in the draft, he was selected by the Milwaukee Bucks, who had finished the prior season with a 38-44 overall record. His rookie season with the team was a tremendous success. He led that year’s rookie class in blocked shots, participated in the 2014 Rising Stars Challenge at NBA All-Star Weekend, and was named to the 2013-14 NBA All-Rookie Second Team!

Now in his seventh season, Antetokounmpo has blossomed into a superstar caliber player for Milwaukee. Along with leading his team to a 60-22 overall record in 2018-19, he was also awarded the NBA’s Most Valuable Player Award that same year. This year, the Milwaukee Bucks have the best record in the league, at 53-12, and are looking to secure the city’s first championship since 1971. And Antetokounmpo will lead the way!