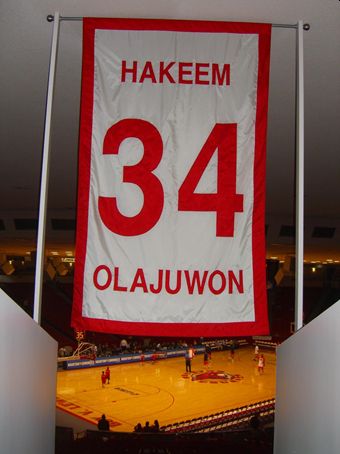 On June 13th, 1995, Hakeem Olajuwon and the Houston Rockets repeated as champions of the NBA World (defeating a young Shaquille O’Neal with a four game sweep). This was certainly a celebration like no other for the city of Houston, as the man they nicknamed “The Dream” was the centerpiece of their basketball dominance, winning two NBA titles in the same decade. But there is a little more to this story for the Nigerian-born superstar. A story of values, determination, teamwork, and a bit of serendipity.

Olajuwon was born on January 21st, 1963 in Lagos (currently the largest city in Nigeria). He was the third of sixth children of a middle-class family who owned a cement business in the city. Although they may have only had a simple cement business at the time, Olajuwon’s parents were keen on teaching their children the essentials of living a successful life:

“They taught us to be honest, work hard, respect our elders, believe in ourselves,” says the former NBA superstar.

However, basketball was not always the optimal choice of sport for Olajuwon. He had spent the majority of the first fifteen years of his life as a goalkeeper in soccer, and also participated in handball competitions. With his gifted footwork, ability, and strength, Olajuwon was eventually recruited by a fellow peer to play for his high school team, the Muslim Teachers College. The team was enrolled at the All-Nigeria Teachers Sports Festival in Sokoto (a city in Northwest Nigeria).  It was here where an NBA star was born.

When it came time for college, Olajuwon came to the United States, settling in the city of Houston, Texas. He enrolled at the University of Houston to play basketball under head coach Guy Lewis. Success on the court was imminent when Olajuwon was acquainted with another hall of fame player. Clyde Drexler, a six foot, seven inch New Orleans born star, teamed up with Olajuwon at the university, and in 1982, the Houston Cougars made the NCAA semifinals. However they fell to future hall of famers James Worthy and Michael Jordan of North Carolina by a final score of 68-63. In the following years, most notably thanks to the efforts of Olajuwon and Drexler, the Cougars continued to surprise doubters, however could not overcome the challenges of the most critical games. In Olajuwon’s final year (1984), Patrick Ewing and the Georgetown Hoyas defeated Houston 84-75 in the NCAA Final.

That same year, the Houston Rockets selected Olajuwon with the first overall draft pick. Two years later, the Rockets would participate in the NBA Finals, and faced the storied Boston Celtics, with Larry Bird leading the way. The Rockets would fall in six games to the Celtics, yet the future looked bright for this up and coming team. In the 1994 Finals, the Rockets overcame a 3-2 series deficit to Patrick Ewing and the New York Knicks, to give the city of Houston their first ever NBA title. Olajuwon won the “Most Valuable Player” Award, securing some revenge on his former college competitor. In 1995, the Rocket’s red glare got a little brighter, when Clyde Drexler returned as Oljuwon’s co-star and helped the team secure a second title.

Olajuwon would eventually retire in 2002, leaving behind one of the most storied careers in the history of not only the Houston Rockets, but the entire NBA.