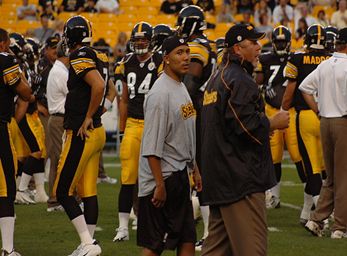 On February 1st, 2009, the Pittsburgh Steelers made history. At the Raymond James Stadium in Tampa, Florida, Ben Rothlisberger and company captured their second Super Bowl championship in four years (securing the sixth overall trophy for the Steelers franchise). With a 27-23 victory that night over the Arizona Cardinals, Pittsburgh proved that their talented roster was capable of achieving the most grueling of tasks. Although players such as Rothlisberger and Super Bowl MVP Santonio Holmes may have dominated the spotlight on that February night in Tampa, there was one player whose journey and work ethic played a major role in one of the nation’s most recognizable sports teams. He goes by the name of Hines Ward.

Hines Ward was born on March 8th, 1976 in Seoul, South Korea. He was born to parents Hines Ward Senior and Kim Young He. Ward Sr. was an African American serviceman with the 2nd Infantry Division, and had met Young He in Seoul. About a year after the birth of his son, Hines Ward Sr. returned with his family to the United States, where he was stationed at Fort McPherson, near Atlanta. Within months, the couple had separated, Hines Sr. had been assigned to a station in Germany, and Kim Young He was now alone with her only child. Once his tour in Europe was over, Hines Sr. returned to the United States and relocated his son to Louisiana with his paternal grandmother. With his mother unable to speak English and no way to support him, the courts deemed Young He an unfit parent. However with her determination and perseverance, Ward’s spirited mother worked many low-paying jobs, and reunited with her son in 1983.

In terms of his athletic career, Ward was a talented and promising quarterback at Forest Park High School in Georgia. He would throw for 38 touchdowns in his high school career and was the Clayton County Offensive Player of the Year for two consecutive seasons. With his sensational talents, Ward decided to commit to the University of Georgia, where he would begin his freshman season in 1994. By 1997, head coach Jim Donnan knew that Ward was one of the team’s most versatile assets. He would finish that season with six touchdowns, and would end his college career as Georgia’s second best all-time receiver (with 144 receptions and 3,870 total yards).

Ward’s dreams of becoming a professional athlete would finally come to fruition at the 1998 NFL Draft, when he was selected with the 92nd overall pick in the third round by the Pittsburgh Steelers. By 2006, Ward and the Steelers were one of the most exciting teams in the league, thanks to an 11-5 regular season record, and advancing to the Super Bowl for the first time since 1996. In that year’s matchup against the Seattle Seahawks in Detroit, Ward caught five passes and scored a touchdown to help secure a 21-10 Pittsburgh victory, and the city’s fifth NFL title. Ward would go on to win the Super Bowl MVP as well, thanks to his awe inspiring performance.

In March of 2012, Ward would retire from the NFL, leaving behind one of the most storied careers in the illustrious history of the Steelers franchise. He is now on the coaching staff for the New York Jets, and hopes to contribute in improving this struggling franchise with his knowledge and experience from his time in Pittsburgh.