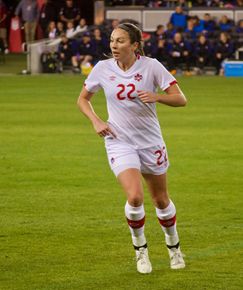 Although she may not be one of the more popular figures on the Canadian Women’s National Team, Lindsay Agnew is certainly on the rise as a potential soccer centerpiece for her squad. Agnew was born on March 31st, 1995 in Kingston, Canada to a hockey family. Both her father and older brother participated in the sport, yet Agnew herself was interested in the more non-traditional activities of Canadian athletics. She began playing soccer at the age of four, and went on to also take part in basketball, track, cross country running, gymnastics, figure skating and horseback riding.

In 2001, Agnew and her family moved to Syracuse, New York. Five years later, they would relocate once more, this time to Columbus, Ohio. She attended Dublin Jerome High School, where her strong expertise in soccer led her to snatch a spot on the team’s varsity roster for all four years of her time at the school. Thanks to her gifted athletic abilities during her youth, Agnew would be named first team All-Ohio and ESPNHS second team All-American after helping Dublin Jerome secure a spot in the finals. She would also represent her native country of Canada at a young age. A couple of her accolades included participating at the 2012 U-17 (Under 17) Women’s World Cup in Azerbaijan, as well as winning a silver medal at the 2012 CONCACAF Women’s U-17 Championship in Guatemala that same year.

In 2013, Agnew would begin her soccer career at Ohio State University. In her junior year, she was an assistant captain for the team, and started in all 23 of their matches at the forward position. Overall, Agnew made 72 total appearances and scored 18 goals for the Buckeyes. At the 2017 NWSL (National Women’s Soccer League) College Draft, Agnew was selected by the Washington Spirit with the 19th overall pick. She would spend time with other teams as well, such as the Houston Dash, Sydney FC in Australia, and signed a contract with the North Carolina Courage in June of 2019.

Although she has yet to score in her professional club career, the story of Lindsay Agnew is one that proves how consistency is critical for success. Whether it was at four years old, as a teenager at Dublin Jerome High School, or as a star for the Ohio State Buckeyes, Agnew always was engaged with sports, which led her to the position she is in now. Consistency truly is the key.