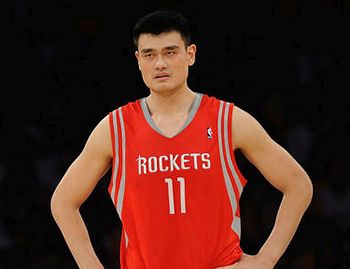 Yao Ming was born on September 12th, 1980 in Shanghai, China. At an early age, Ming towered over his fellow schoolmates, and by the age of 12, he would participate in heavily competitive basketball academies in his community. In 1997, Ming would play professionally with the Shanghai Sharks of the Chinese Basketball Association (CBA). In five seasons with the team, Ming would play 136 games and score over 3,000 points. He would also devour almost 2,100 offensive and defensive rebounds combined, which helped contribute to his status as a national icon of China. Ming also competed in the 2000 Sydney Olympics, where he would lead his national team to a 10th place finish.

When 2002 came along, Yao had committed to playing overseas and begin his career in the NBA. In that year’s draft, the Houston Rockets were granted with the first overall pick. Having not won an NBA Championship in seven years, the Rockets were hungry for another title run. With that coveted first pick, Houston selected Ming, who had already made some history. Being the first pick that year, Ming was the highest draft pick to come directly from an international basketball league, but the accomplishments did not stop there. For the 2003 NBA All Star Game in Atlanta, Ming became the first rookie in eight years to be selected by fans as a starter in the game. The 7 foot, 6 inch superstar’s accolades would continue to mount. Ming would lead the Rockets to the playoffs in 2004, 2005, 2007, 2008, and 2009. After the 2008-2009 NBA Season, injuries began to plague the Chinese star’s future. Due to a stress fracture in his ankle, Ming would retire from basketball in 2011.

Although he would leave the game of basketball, Yao Ming’s legacy is one that will reminisce not only for immigrants, but for all aspiring young players. He is a major reason as to why the NBA is the most popular foreign sports league in China, and has demonstrated that any immigrant can break boundaries even at the highest of levels.